A gift of basic watercolor lessons by Ernie Haring
​began a solitary focus on the medium
my website
Jimmy Magouirk was born and raised in Slaton, Texas. Art has been an attraction for him all his life: from childhood when his mother taught him how to draw cartoon characters; junior high school where he wrote, illustrated and sold comic books to classmates on notebook paper; high school, selling pop art posters; to painting the stage scenery backdrop for his children’s elementary school annual plays.

Jimmy’s goal is to see a subject that he finds exciting, accomplish a work that projects that same excitement back to him 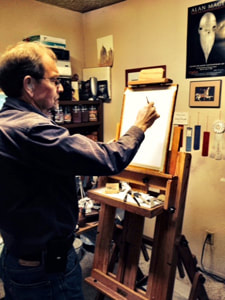 A 1981 gift of basic watercolor lessons by Ernie Haring in Sherman, Texas from his wife, Judy, began a solitary focus on the medium to the present date. Retiring from Verizon in 2012 freed up time to paint more frequently and to show more of his work. After moving to Loveland, Colorado in 2016, the beauty of the landscape inspired him to reach for the brush once again. Jimmy’s goal is to see a subject that he finds exciting, accomplish a work that projects that same excitement back to him, then have that painting strike a chord with another.

Jimmy has been accepted, exhibited and received awards from many art organizations in Texas from 1988 to 2016, such as Sherman Art League, USPS local Post Office in Van Alstyne, Texas, Van Alstyne Public Library, Texas Visual Arts Association in Plano and Dallas, Plano Art Association and the Southwestern Watercolor Society in Dallas. Regionally, there were two accepted shows in the Western Federation of Watercolor Societies; 2015 in Lubbock, Texas and in 2016, Arvada, Colorado. Also in Colorado, Jimmy was accepted in the Colorado Watercolor Society’s 2017 State Exhibit in Golden, Colorado and the 2017 Regional Show at the Thompson Valley Art Association’s Lincoln Gallery in Loveland, Colorado.
Lincoln Gallery/Thompson Valley Art League