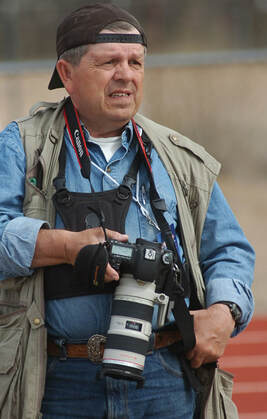 I was born in Austria, raised in New York City, and joined the Army after school so I could jump out of airplanes for fun and money. After several years in the Army I went to New Mexico to work for Sandia National Laboratories. In New Mexico I started “shooting pictures” on my days off, of the many fascinating places and things I saw there. Almost fifty years later, I’m still “shooting pictures”.

New Mexico has phenomenal light and as I read various books on photography and learned more about light, I started to experiment with that natural light in New Mexico. I became a devotee to “shooting in the golden hours” and disciple of the “school of f/16”.

In the 1970’s I was influenced a lot by Jack Dykinga and David Muench. I would pore over their coffee-table books for hours looking for places to go and imitate their work. I would also wander through the galleries of Santa Fe fascinated by the paintings of Georgia O'Keeffe’s and others, and looking for photographic exhibits. Basically I learned photography by trial-and-error, by attending workshops mostly in Santa Fe, and with some mentoring from friends who did various kinds of photographic work for Sandia Labs.

Basically I learned photography by trial-and-error . . .

Over the years I experimented with a variety of techniques and subjects. I shoot mostly in those “golden hours” when the natural light just makes everything look fantastic. I’m often on site before the sun comes up, or hiking back to the car in the dark. If I have to shoot outside of those “golden hours”, I work on finding the right combination of camera settings that makes what I’m looking at, exactly what the image will show. If I don’t do a good job the first time, I figure out what I did wrong and go back for a second or third try, until I get it right.

When I retired from Sandia National Labs someone told me I’d be bored. So I took some sports images I’d shoot over the years, of my daughters and their friends, to the local newspaper and got a part-time job photographing High School and college sports around the Albuquerque area, along with rodeos and other special events. That was an education! The light at a Friday night football game, or at a basketball game in many High School gyms, is always terrible for the speed at which you have to shoot. And you can’t shoot a flash into the eyes of the running back coming around the end of the defensive line, or at the guy going for a jump shot at the basketball game.

I was once told that if I wanted to be recognized as a great photographer I needed a “theme” to specialize in. Jack Dykinga did mostly desert flowers and desert landscapes; Art Morris does birds; and Ansel Adams specialized in black-and-white’s of Yosemite. I decided I was more like Eddie Soloway, a Santa Fe photographer I know, who shoots whatever he likes at any given time, or whatever attracts his attention. I like butterflies, birds, flowers, landscapes, architecture, and sports. Just about anything! Mike Moats specializes in macro because it can be striking and everyone likes it.  So I tried a little of that too. When I hike in the back-country, I look up, down, left, and right, and I hike slowly to avoid falling off cliffs.

The one thing I do love is color. Color under the right lighting conditions just pops out at you.

I moved to Colorado in 2017 to be closer to family and grandkids, and just like I explored New Mexico and Arizona with a camera for 45 years, I’m now exploring Colorado, Wyoming, and points north, for places to photograph.  In the winter I often “snowbird” in Texas, visiting with my other two grandkids and basically doing the same thing.